A new NI LGBT group called “3 for Equality” is 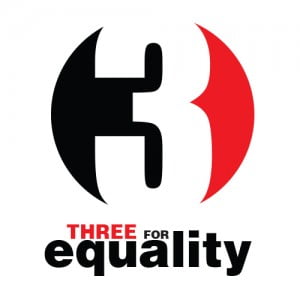 seeking your support to explore alternative and imaginative ways to overcome the DUP blockade on marriage equality as well as other LGBT related issues in Northern Ireland.

3 for Equality aims to encourage the LGBT community and it’s supporters to participate in the equal rights movement in a more fun and hands-on way.

Northern Ireland’s LGBT community have signed more than a few petitions against a plethora of prejudiced political parties and politicians. The targets of these petitions have only grown stronger in their determination to disparage the LGBT community at any given opportunity without fear of impugn.

Failure will never overtake me if my determination to succeed is strong enough.
― Og Mandino

We say ‘Grab yer coat’ it’s time to summon the courage, strength and determination to make the changes necessary to bring about equality.

“We are only as strong as we are united, as weak as we are divided.”
― J.K. Rowling, Harry Potter and the Goblet of Fire

Hiding behind the glare of an internet connected device and proudly adding your name to another rapidly growing list on the latest petition is clearly not accomplishing much. Signing forms from the comfort of your home, retweeting, favouriting tweets, liking Facebook support pages and confirming attendance at events on Facebook is easy. Being a keyboard warrior is easy. However it is evident from yet another marriage equality defeat this week that this lackadaisical attitude is failing us. Do what is right, not what is easy.

The group asks people to take a pledge to get more involved in making Northern Ireland a better place for the LGBT community. It doesn’t matter if you regularly toe the picket line or whether you’re used to just signing the odd change.org petition and hoping for the best. 3 for NI LGBT Equality just want people to realise that “enough is enough” and be prepared to be committed to start taking action to bring about change.

“Be the change that you wish to see in the world.”
― Mahatma Gandhi

The page asks members who like their page to make a promise to get another 3 people involved in the group, take action and pass on the pledge.

“Desire is the key to motivation, but it’s determination and commitment to an unrelenting pursuit of your goal – a commitment to excellence – that will enable you to attain the success you seek.”
― Mario Andretti

Set up in response to growing frustration and impatience from within the LGBT community with regards to important rights issues such as marriage equality, the gay blood ban, homophobic outbursts from political representatives and inequality in adoption services, it’s clear there is still a lot of progress to be made.

“Impossible only means the solution hasn’t been found yet”
― Unknown

“3 for Equality” wants to motivate people out of complacency with regards to these human rights abuses.

“Were it not for the leaping and twinkling of the soul, man would rot away in his greatest passion, idleness.”
― C.G. Jung, The Archetypes and the Collective Unconscious

Some LGBT people live normal lives and others face a traumatic daily struggle. (Check out the summary of The Rainbow Project’s study into the mental health and wellbeing of the Northern Ireland LGBT community below this announcement for some shocking and eye-opening stats.)

The truth is it doesn’t have to be like this.

Organisers hope to attract many new people into active participation in standing up for LGBT rights. Everyone has something to offer.

“The difference between involvement and commitment is like ham and eggs. The chicken is involved; the pig is committed.”
― Martina Navratilova

People like to complain but do nothing about the complaint.

“People say nothing is impossible, but I do nothing every day.”
― A.A. Milne, Winnie-the-Pooh

There’s only one thing better than coming together on a list for a petition and that is coming out and showing our faces and showcasing our communities and culture with pride.

To get involved you can get in touch via the 3 for NI LGBT Equality Facebook page or contact us and we will pass on the message to the admin team. The team are currently looking for support and activists to get involved in supporting and organising events and activities.

Emotional Health and Wellbeing of the NI LGBT Community

(Source of statistics: The Rainbow Project of Northern Ireland):

“Out on Your Own? An examination of the Mental Health of Young Same-Sex Attracted Men (McNamee, 2006)” revealed that mental health problems were at epidemic levels:

Negative experiences at school and work were at disturbing levels:

Another report: All Partied Out? Substance Use in Northern Ireland’s LGB&T Community (Rooney, 2012) showed alcohol and substance abuse were endemic:

The paper called “Through Our Minds” by Malachai O’Hara was first published December 2013 and offers a frightening statistical insight into the LGBT community’s experiences of self-harm, suicidal ideation, suicide attempts and depression experienced by the LGBT community.

Experiences of Self- Harm

Depression is the experience of feeling down, low or fed up. This, particularly in times of adversity or difficulty, is a normal human experience. Depression is common and may affect up to 1 in 4 people at some stage in their lives, with women more likely to experience it than men, and impacting across people of all backgrounds. Some recent reports have suggested that somewhere between 8%-12% of the population of Northern Ireland may experience depression in any year