A survey into the “attitudes towards Lesbian and Gay Relationships and Families” in the 2012 Northern Ireland life and Times Survey showed that the majority (58%) of those questioned felt that marriage between same-sex couples should be legally recognised.

The Northern Ireland Life and Times (NILT) Survey has asked questions on lesbian, gay, bisexual and transgender (LGBT) issues since 1998. 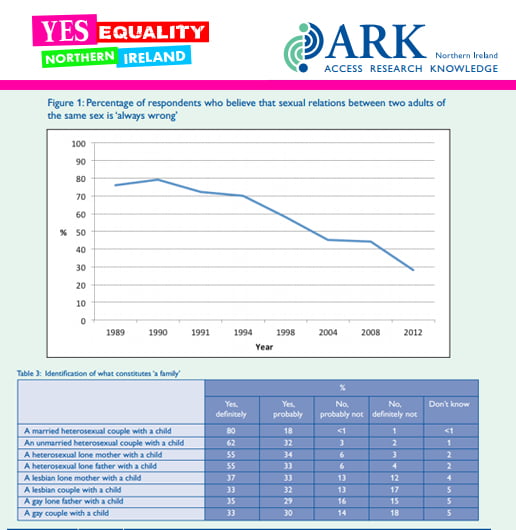 To date survey data have focused primarily on issues relating to prejudice, discrimination and tolerance. In 2012 a range of questions focusing more specifically on LGBT issues was included. This collected information on knowledge and perceptions of the LGBT population; personal prejudice; attitudes on equality issues; the visibility of LGBT people and family-related issues.

The 2012 NILT Survey incorporated 1204 face-to-face interviews with adults aged 18 years or over. Most questions were included in the main face-to-face interview, which was carried out using computer assisted personal interviewing (CAPI). A shorter self-completion section was then undertaken by the respondent, either using computer assisted self-interviewing (CASI) or a paper self-completion booklet. All interviews were conducted during the period from 1st October 2012 to 10th January 2013. Interviewing was carried out by social survey interviewers employed by Perceptive Insight, in the respondents’ own home.

There were some interesting key summary points noted by the survey:

“Throughout the analysis consistent findings emerged. With regards to views on marriage, family and parenting the best predictor of attitudes was whether or not the respondent believed sexual orientation was a ‘choice’.

Being Protestant, being older, attending church regularly and not knowing someone who is lesbian or gay were also good predictors of less approving/ supportive attitudes.

In broad terms there have been positive changes in attitudes towards lesbian and gay people in Northern Ireland over the past two decades. Attitudes towards samesex relations have softened and there is an acceptance of a wider construction of ‘the family’. That said, a hierarchy remains whereby heterosexual marriage, families and parenting is privileged above all else. Attitudinal change coinciding with increased attention to gay and lesbian people and issues of gay rights has occurred in other countries (Anderson & Fetner, 2008; Baunach, 2012). Whether policy and legislative change is cause or effect is debated, it is nevertheless important in respect of public attitudes.”

Click Here to access a detailed breakdown of the data showing the findings of this research project or Click Here to read the 2013 overview of some of the information emerging from this data.