What does it take to run a Yes Campaign for Marriage Equality? Would Northern Ireland be able to pull it off? 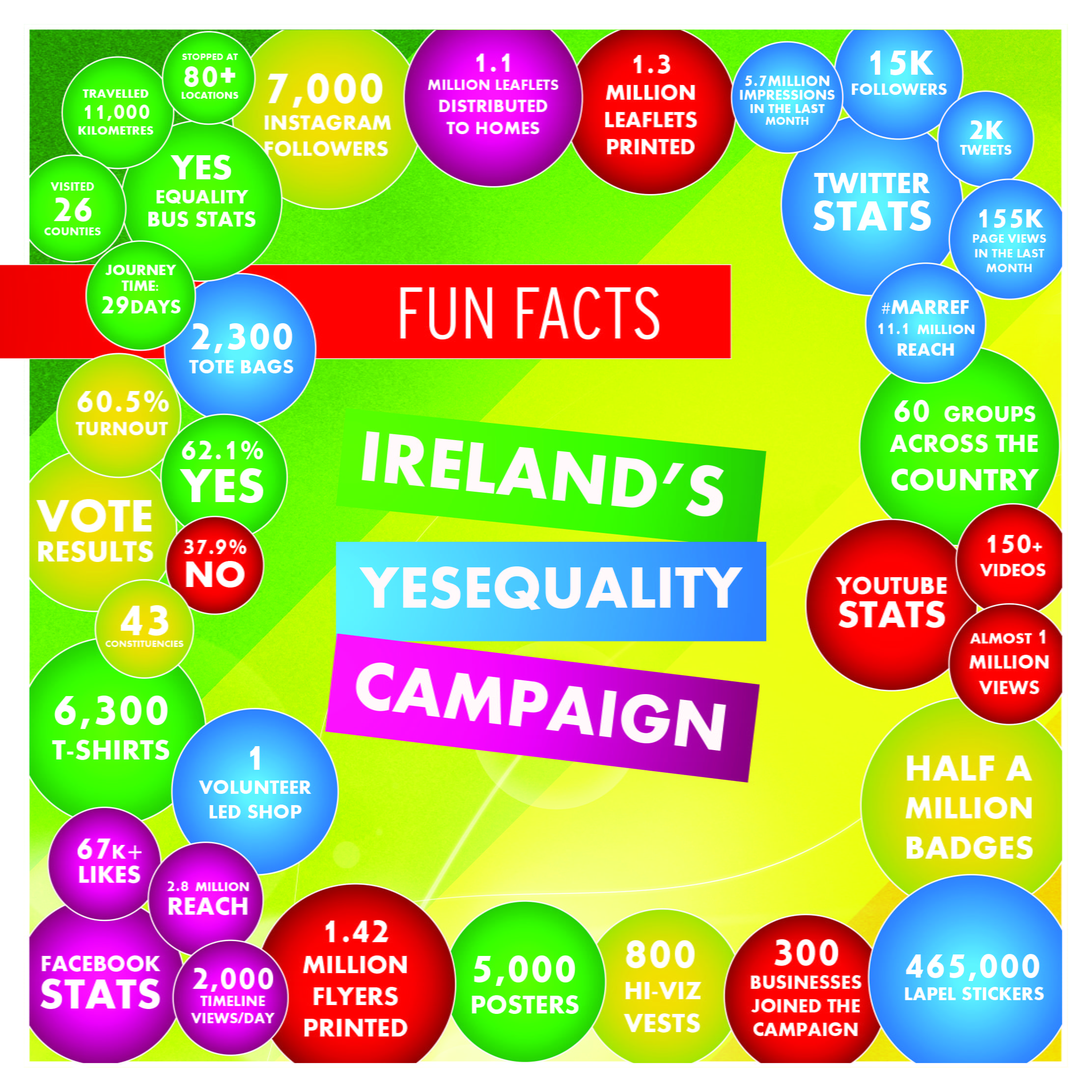 The Irish Constitution has been amended and LGBT+ people can now enjoy having their relationships and families fully recognised and protected under law. An unbelievably successful YES campaign achieved something that the LGBT+ community in Ireland would not have dreamed were possible ten years ago. 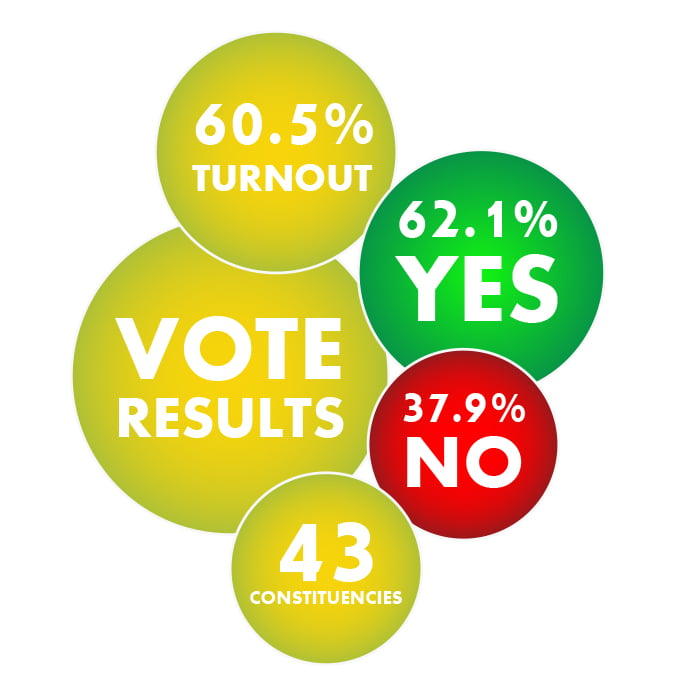 The significance of the referendum is undeniable. Ireland has become the first country in the world to legalise civil marriage by public vote and those who fought and campaigned for this equality are thrilled.

Such was the success and reach of the YES Campaign that many people in Northern Ireland and further afield were swept up in all of the energy and positivity accompanying the campaign.

The day after the referendum vote people in the Republic of Ireland awoke to the dawn of a new era of equality.

Those of us in Northern Ireland who had become so involved and interested in the campaign across the border were left with an “equality hangover”.

The bus on the bumpy road to equality had stopped at Ireland and more of our neighbours disembarked with pride to relish and enjoy equality. The NI LGBT community is still stuck on the bus but more motivated than ever to tackle an uphill battle.

Attempts at introducing marriage equality legislation in Northern Ireland have so far failed four times. The DUP has chosen to put forward a petition of concern at every vote in the Stormont Assembly in order to ensure that the bill will never pass even with majority support. 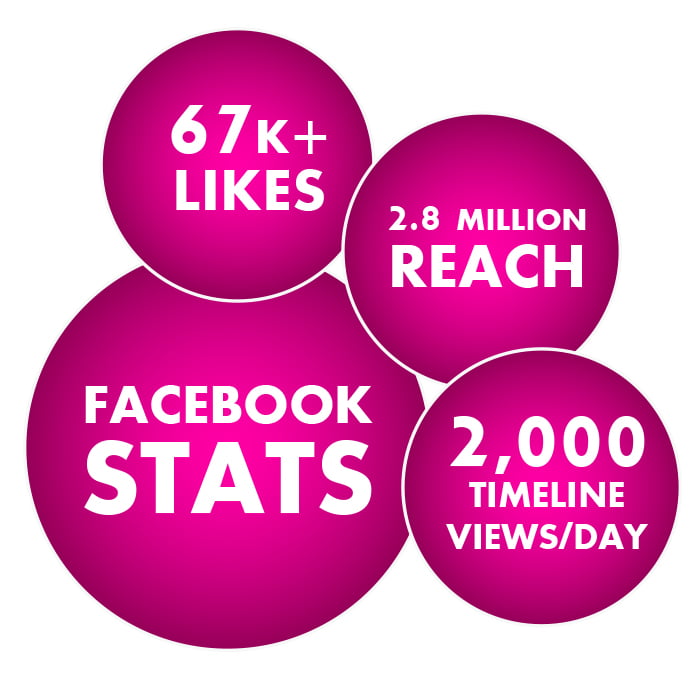 Witnessing the passion and drive to succeed in the eyes of those who campaigned for their rights was inspirational, motivational and provided the necessary nudge for people to get more involved in making changes and campaigning for their rights.

Why shouldn’t Northern Ireland be given the same opportunity? Why do we have to hold out so long for these rights and our equality?

It was announced back in January of this year that legal action taken by a gay couple who were married in England but now live in the region was aiming to achieve equal status for their marriage.

The couple, who have asked to remain anonymous, will press the court to make a declaration that their marriage remains lawfully constituted in Northern Ireland as part of the UK and should be recognised as such. Reporting restrictions have been imposed in the court so as not to identify the couple.

“They have asked the family court to make a declaration that their marriage was lawfully constituted at inception and that it remains lawful in Northern Ireland,” said Gavin Boyd, a Belfast-based activist with the Rainbow Project, one of Northern Ireland’s main gay rights organisations. The case will next be heard in November.” 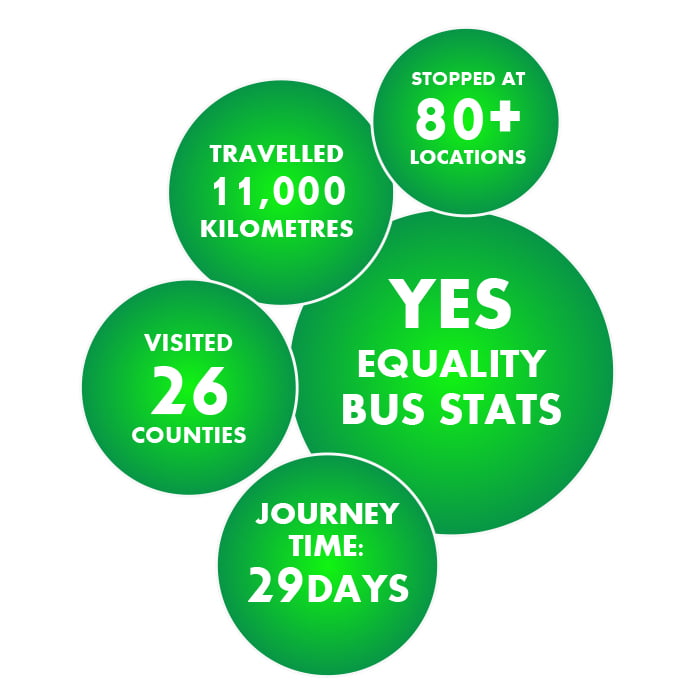 Marriage equality activists remain hopeful that this landmark case will result in legislation for equal marriage.

Earlier this week MPs from a number of parties in Westminster signed an early-day motion calling on the government to take action to support same-sex marriage in Northern Ireland.

Islington South and Finsbury MP Emily Thornberry who tabled the early day motion in parliament said she was “delighted to have tabled one of the first Early Day Motions of the new Parliament, celebrating [Ireland’s] historic victory for equality.”

The EDM congratulated Ireland for amending its constitution to include members of the LGBT+ community and called for Northern Ireland to follow suit. 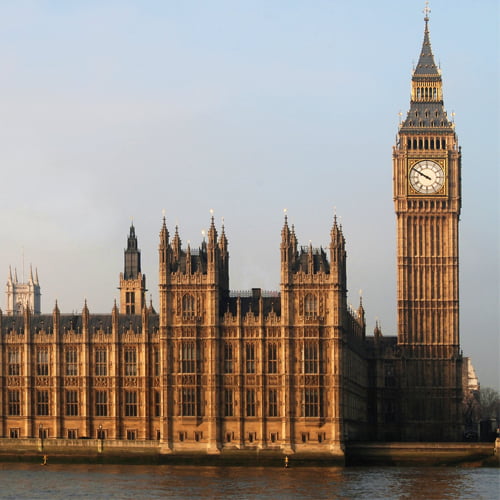 who voted in the privacy of the ballot box made a very public statement in the spirit of generosity, compassion, inclusion, love and equal marriage”

“That this House recognises the support given by LGBT Irish in Britain, many of whom got the boat or flew back to participate on the day”

“That this House further believes that the Irish vote can serve as a beacon of hope for those still facing oppression; and urges the Government to support LGBT equality around the world, most immediately in Northern Ireland, the only part of the UK and the island of Ireland where same-sex couples will still be barred from availing of their civil liberties.”

If the legal challenge currently being prepared for the courts does not succeed and pressure from the Conservative government in charge at Westinster proves fruitless then the only alternative would be to push politicians for a referendum vote on the issue.

A Change.org petition calling for a Northern Ireland Referendum on Marriage Equality has now achieved almost 20,000 signatures so there is certainly demand for the opportunity to vote.

Earlier this week Belfast City Council added even more pressure on politicians to make a change when it voted unanimously to support marriage equality. Councillors voted in favour of legalising gay marriage in Northern Ireland by 38 to 13.

Gavin Walker of the Alliance Party has also introduced a Motion into Ards & North Down Borough Council requesting that “we write immediately to the Minister of Finance and Personnel to introduce legislation to extend civil marriage provisions to same sex couples.” 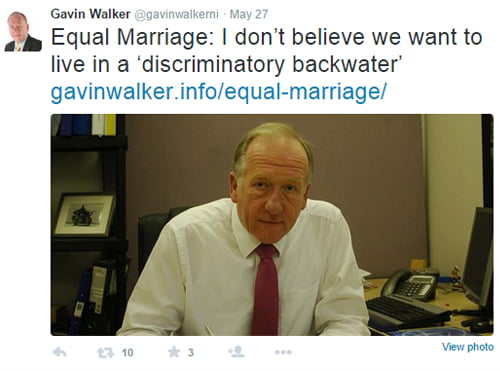 The Motion has been lodged with the Chief Executive’s Office for inclusion on the Agenda of the next available Council Meeting (June 24) when it will be referred to Committee for debate before being brought back to September Council (September 30) for ratification.

The Motion in Full:

That this Council believes that all couples in Ards & North Down and across Northern Ireland, regardless of sexual orientation, should have the right to a civil marriage; that the rights of religious institutions to define, observe and practise marriage within their beliefs should be given legal protection; that faith groups which wish to marry same sex couples should not be prevented by the state from doing so; that all married couples of the same sex should have the same legal entitlement to the protections, responsibilities, rights, obligations and benefits afforded by the legal institution of marriage; and calls on the Minister of Finance and Personnel to introduce legislation to extend civil marriage provisions to same sex couples.

The stats published alongside this article were provided by YesEquality on 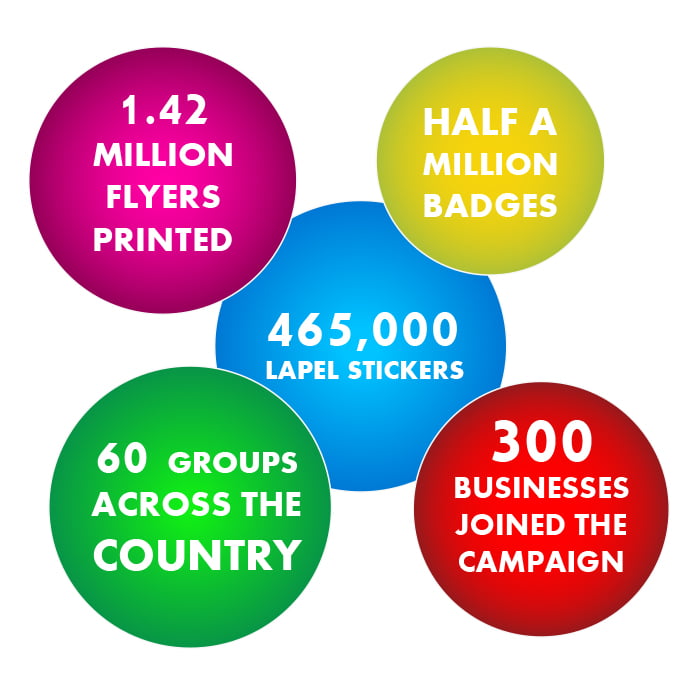 their homepage. The numbers provide a useful snapshot of how much effort and work is involved in one organisation’s front-end marriage equality campaign.

Not only can a referendum campaign prove costly but it needs massive amounts of support from the LGBT+ community to reach out to the masses, help change the opinion of those not in favour of equal marriage rights and to be vocal about why these rights are important. The difference with Northern Ireland is that it does not depend on a referendum vote to introduce marriage equality and even if a referendum did go ahead the result wouldn’t be legally standing.

Is Northern Ireland really up to that challenge? Could our communities unite and work as hard to produce a result that NI can really be proud of? Would the ideas and comments from those opposed to marriage equality and a cruel NO campaign cause so much hurt and pain within our community to the extent  support services couldn’t cope? Is this now something we need to do to help prevent future generations from being subjected to the same prejudices and discrimination currently evident in the media? 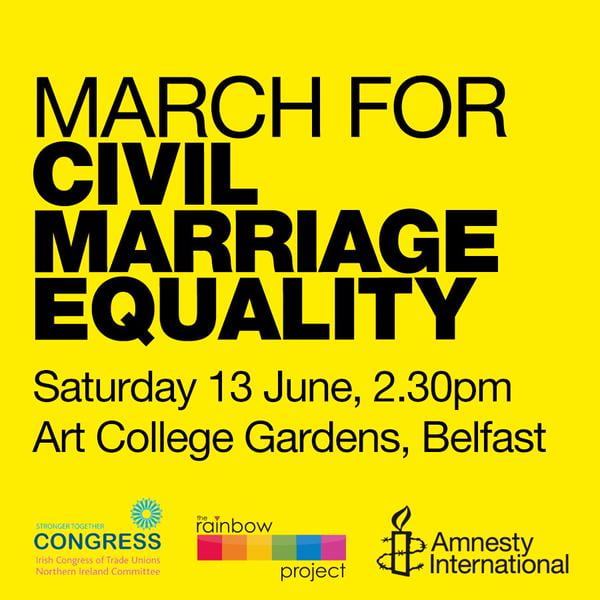 statement for Northern Ireland to make right now but equality is something we need to work extremely hard for.

For now you can show your support by attending the “March for Equality” being organised by The Rainbow Project, The Irish Congress of Trade Unions and Amnesty International on Saturday 13th of June at 2:30pm. Please note that the assembly point for the march has changed to the Art College Gardens and not as previously advertised in Writer’s Square.