Show Northern Ireland what Equality means to you this weekend! #MarchForEquality

A large protest is set to be held in Belfast this Saturday afternoon – calling on Northern Ireland to follow the Republic in introducing marriage equality.

The Republic of Ireland overwhelmingly voted to introduce same-sex marriage in a referendum last month, with 62.1% voting in favour of modifying the constitution.

Voters chose to amend Article 41 of the 1937 Constitution in a section titled The Family to say:  “Marriage may be contracted in accordance with law by two persons without distinction as to their sex.”

However, in Northern Ireland the DUP government continues to block progress on the issue, filing a ‘petition of concern’ to block plans for a fourth time last month.

LGBT activists in Northern Ireland plan to take to the streets this weekend, to point out the country is now clearly the odd one out on the issue – with mainland Britain and the Republic of Ireland both embracing the equality legislation. 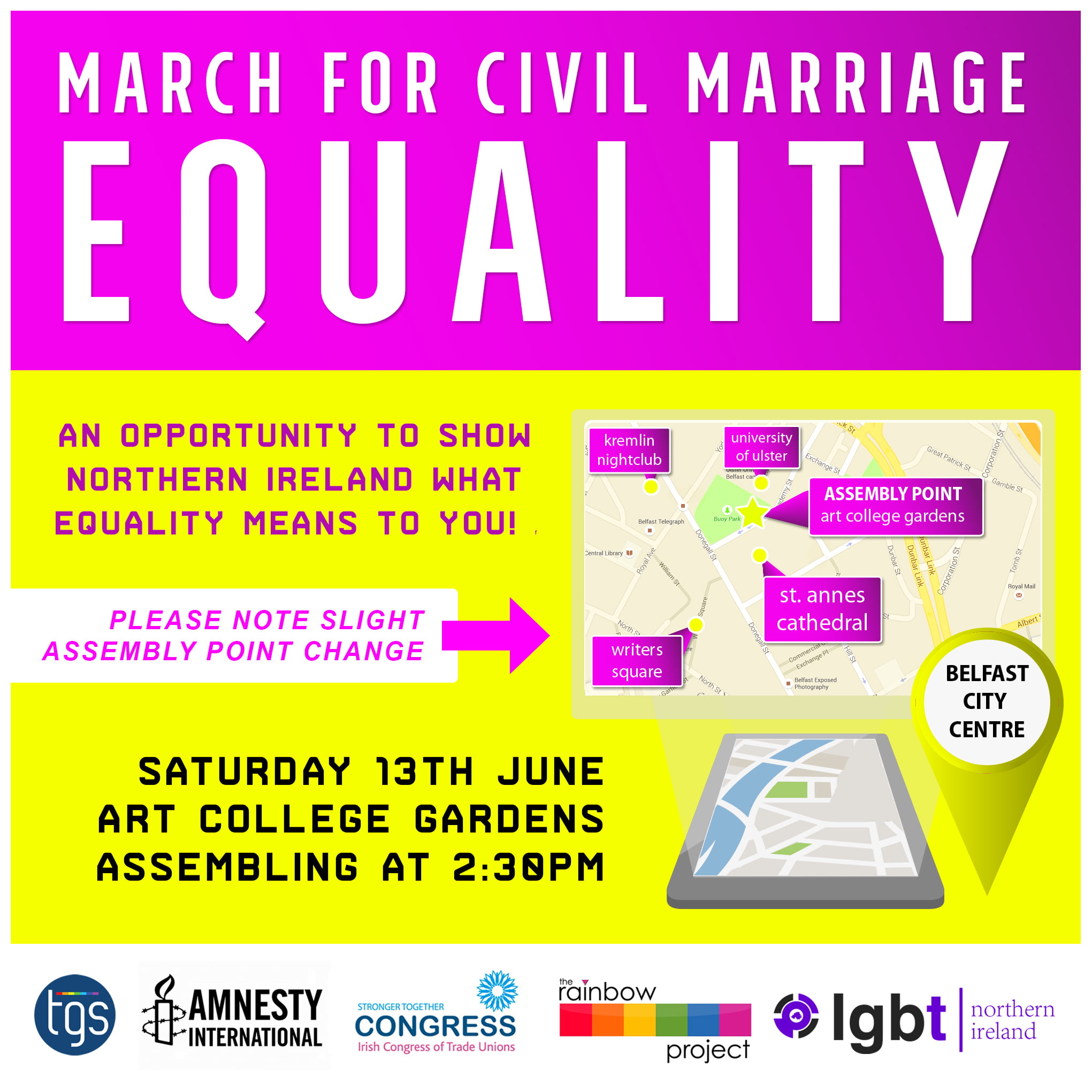 The demonstration is jointly organised by Amnesty International, the Irish Congress of Trade Unions and the Rainbow Project.

Almost 3,000 people have confirmed their attendance at the March on the Facebook event page so far.

“People in Northern Ireland are sick of living in a discriminatory backwater for gay people.

The March for Civil Marriage Equality, through central Belfast on Saturday 13 June, will culminate in a rally in front of Belfast City Hall.

A statement from Amnesty International regarding the event reads:

“Why are we marching?”

“For decades, we’ve campaigned against the violence and discrimination so frequently endured by LGBTI people around the world.”

“We know that discrimination can take different forms and is often reflected in how states deny LGBTI people many basic rights other people take for granted. One key example is access to civil marriage. Globally, Amnesty opposes discrimination in civil marriage laws on the basis of sexual orientation or gender identity.”

Last month the Irish Congress of Trade Unions General Secretary Patricia King warmly welcomed the overwhelming yes vote in the marriage equality referendum in the Republic of Ireland and paid tribute to the many trade unions and activists “who were in the forefront of this drive for a more equal Ireland.”

Ms King said: “Congress stongly backed a yes vote and campaigned to make it a reality. That was the right thing to do and reflects the very strong commitment of the trade union movement to equality and our key role in achieving greater fairness and justice, over many decades.”

Ms King paid tribute to the many trade unions that actively backed the campaign at a national and grassroots level.

Ethel Buckley, co-convenor of Trade Unionists for Civil Marraige Equality, said that that having achieved this magnificent result, trade unions “will continue our fight for justice in every sphere of society.”

Now the organisation is taking that fight to one of the most homophobic places in Western Europe and finally it seems there might be enough public pressure and support to ensure politicians can no longer dictate which rights a minority community can have access to.

A statement from the ICTU regarding this weekends march reads:

“With the resounding Yes vote for the marriage equality referendum in the Republic of Ireland, Northern Ireland remains out on a limb on this issue, being the only part of the United Kingdom or Ireland where same sex couples are denied the right to marry.”

“ICTU played a leading role in campaigning for a Yes vote in the marriage equality referendum in the Republic of Ireland. The strong support of trade unions and activists for the Yes Campaign was a reflection of the deep commitment of workers to the concepts of equality and solidarity.”

“In 2005, history was made when Northern Ireland became the first place in the UK to hold a civil partnership; 10 years later, with every other part of these islands recognising marriage equality, citizens in Northern Ireland have effectively been left behind.”

“The Northern Ireland Committee ICTU calls on all trade unions to support the campaign for Civil Marriage Equality and march for Equality on Saturday 13 June.”

The march will assemble at 2.30pm on Saturday the 13th of June in Art College Gardens (see map above).

Use #MarchForEquality on your tweets!