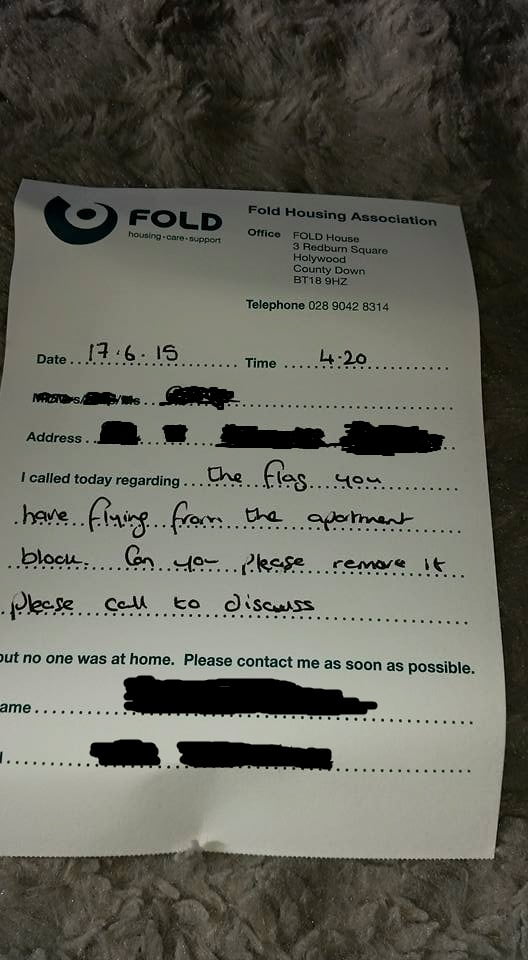 The letter posted through Antoinette’s door from Fold Housing Association

The Northern Ireland Housing Association: FOLD has come under fire this morning after it emerged they posted a letter asking a Belfast resident to remove the flags she had placed outside her apartment in support of marriage equality.

Antoinette Clarke, 32, arrived home to a notice through her door from Fold Housing Association asking her to take down the rainbow striped flags.

Speaking to Belfast Live, Antoinette said she was “very annoyed” to arrive home to the notice.

She added: “I suffer from depression, anxiety panic attacks and I had a good day for a change, it was the first day I had been out of the house in a while, and to come home to this – I was very annoyed.

“I couldn’t attend the march for equality on Saturday due to my mental health issues, so I put the flags out to show my support.”

Antoinette said she has had other flags hanging from her apartment in the past and there has never been an issue.

She added: “I’ve had other flags out of my apartment before, I had a Palestine one and a Germany one and nothing was ever said before.

“I tried to call the number on the card but it was too late when I got home but I will be contacting them in the morning and so will my solicitor.”