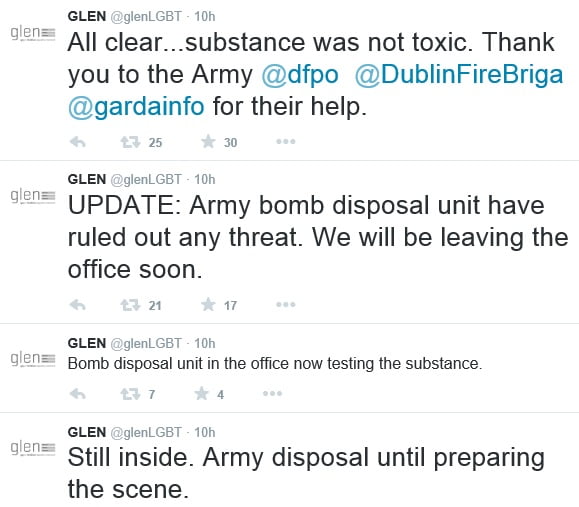 A suspicious package sent to the offices of the Gay and Lesbian Equality Network (GLEN) in Dublin city centre on Thursday turned out to be a hoax but resulted in a significant security operation being put into place.

The Garda, Dublin Fire Brigade and the Army’s bomb disposal team were called to GLEN’s office on Exchange Street Upper, Dublin 8, when a parcel arrived in the morning post with blue powder inside.

The building was evacuated and a busy area of Dublin sealed off before the package could be properly examined and tested for biological, chemical and hazardous materials.

The operation continued for five hours until the powder was declared a hoax and the area reopened.

The charity tweeted pictures throughout the response. Six fire engines and a bomb disposal team were involved on site.

Tiernan Brady of GLEN told The Journal: “The intent was to terrorise – no matter what was in the envelope.

“We’ve never had this before and the goal was to scare us and inflict terror.”

Sinn Féin councillor and chair of its LGBT group Chris Curran said: “Irish people resoundingly supported LGBT rights in the referendum last month and this type of incident has no place in our society.

“I call on the Gardaí to fully investigate this threat and to take the necessary precautions to ensure that the Pride Parade and associated celebrations go ahead without further incident.”

GLEN is one of Ireland’s largest gay rights groups, and was instrumental in calling for a ‘Yes’ vote in last month’s same-sex marriage referendum.