Support for marriage equality in Northern Ireland appears to have increased significantly following the Republic of Ireland’s hugely successful referendum – and the results of the latest Ipsos MORI poll  suggest that even more people here could potentially vote ‘Yes’ for marriage equality than in the South.

The 2015 survey found that 68% of adults in Northern Ireland believe same-sex couples should be allowed to marry – compared to the 62.1% ‘Yes’ vote outcome in the Republic.

It is worth noting that the opinion polls consistently over estimated the size of the “Yes” Vote in the run up to the Republic’s referendum date.

Support was highest in greater Belfast, at 75 per cent, and in other areas it dipped to 63 per cent support.

There was much higher support among Catholics (75 per cent) than Protestants (57 per cent). 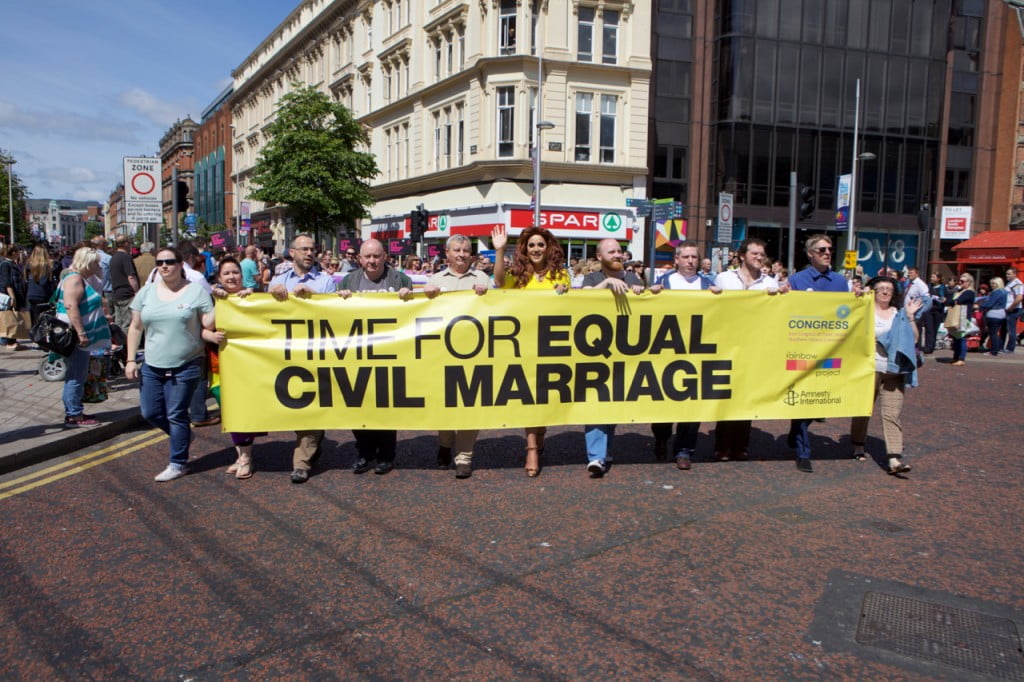 Amnesty International has said the figures  from this latest poll show Northern Ireland’s politicians are “badly out of step with ordinary people” on the issue.

“The people have spoken and it’s clear they don’t want Northern Ireland to be left behind on marriage equality.

“This poll shows support in Northern Ireland for equal marriage is even higher than in Ireland’s landslide referendum.

“Northern Ireland’s politicians are badly out of step with the people on marriage equality.

“Continuing resistance to bringing Northern Ireland in step with all our neighbours is unacceptable. It’s high time Northern Ireland said a big ‘we do too’ to equality. The Stormont Executive should bring forward marriage equality legislation without further delay.”

Ipsos MORI’s 2015 poll interviewed a representative sample of 1,000 adults aged 16+ across Northern Ireland. Interviews were conducted face-to-face between May 20 and June 8 2015. Data are weighted to match the profile of the population.