A gay priest in Northern Ireland has told the Stephen Nolan Radio Ulster Breakfast Show that he is actively contemplating taking his own life because of the church and societal attitudes towards his sexuality.

Yesterday on The Stephen Nolan show the priest spoke of his personal anguish and his experiences living with knowing he has been gay which he described as being “sheer hell” and has been “tearing him apart” over the last 15 years. Listen to the full interview at the bottom of this page, or continue reading.

To protect the identity of the priest in question, a voiceover actor stood in for the priest on the broadcasted interview.

Stephen began by asking the priest when he knew he was gay.

“I think it was when I was about 10 years old and I had been gay since then, I really struggled with my sexuality and then I suppose I still do to some extent. So, for someone to say it’s a lifestyle choice is nothing more than a disgusting slur… because there are times when I wish I wasn’t gay, that dismisses the entire theory, in my view, that it is a lifestyle choice. It certainly isn’t on my part… I have noticed people using this particular argument alot recently in relation to same-sex marriage and especially from some politicians who do not comprehend what that does to a person psychologically. By saying that it is a lifestyle choice, by referring to gay people as ‘not natural’, that they have chosen to be that way, basically sickens me. Many gay men and women have taken their own lives, some priests have done so because they felt demonised by such terms, terminology and language.” the priest said.

Nolan continued by asking the priest what it was like growing up in Northern Ireland knowing that he was gay from such a young age.

“Yes, it was very, very difficult indeed. Trying to cover that, I couldn’t express it in any way as my parents were very conservative in their views and thinking. Being surrounded by people making homophobic remarks and viewpoints was really difficult trying to deal with, to live with and feeling very insecure indeed. It was very difficult to say the least” the priest replied.

The radio presenter then went on to ask if living with those aforementioned difficulties or the situation with his family had been responsible for steering him in the direction of the priesthood.

“Partly” the priest responded. “Although I wasn’t influenced at all by my parents and training to face it… alot of priests do use it as cover for being gay as priests obviously don’t marry. So, it’s a convenient way perhaps of dealing with it. Ofcourse people will say to you ‘you don’t have a girlfriend, you should be married’ and that puts undue pressure on people because people then assume if you don’t marry there is something wrong with you or perhaps assume you are gay” he continued.

“Did you ever think there was something wrong with you” Stephen asked.

“There were times, perhaps in my younger years, it took me quite some time to accept it and to accept it as part of me and part of who I am. It has been a very, very hard journey and a very, very stressful journey that has taken it’s toll on my health” the priest replied.

When the radio presenter asked the priest to elaborate on how the pressure and anguish had impacted on his mental health he said:

“It has driven me to excessively drinking alcohol, I can spend days in bed shutting out the world, not communicating with people, it has driven me at times to feeling like committing suicide and recently I have felt as though I was in that position. It has been very difficult on my mental health as well as my general health and I am sure there are many people out there who might be feeling the same way. People who can’t come out, because they will feel rejected – not only by their families but by society as a whole.”

The priest went on to describe how his experiences with suicidal thoughts had emerged from Nothern Ireland’s inability to accept and understand same-sex relationships.

“Particularly when you listen to other peoples viewpoints on homosexuality many gay men and women have taken their own lives, some priests have as well because they feel demonised and I do also. I am not unnatural, I’m not sub-human, I’m no different to anyone else in society and I am an equal. That is not the reality… It does affect you psychologically [listening to such remarks] what people say. If I decide to shut myself away and spend days in bed, then turn on the news and you again hear people talking about homosexuality as not being natural, that does affect you psychologically. 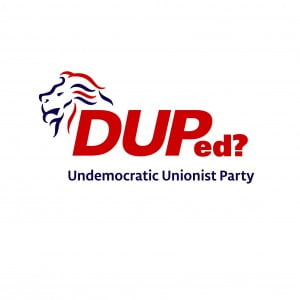 Recently we had the DUP councillor [Thomas Kerrigan] from Stabane and Derry Council saying that gay people are gay or have that lifestyle because they don’t pray or go to church and I despair at that because the gay community attend church. I minister within it, so are we cured by that? Why would you need cured? Its although you have some sort of deformity, or sickness, or disease and that’s what makes people like me from within the gay community feel the way they do. He [DUP Councillor, Thomas Kerrigan] was totally irresponsible in what he said”

Mr Nolan went on to read a statement from the DUP stating that members are “entitled to their own views” but they are not the position of the party. The presenter then enquired as to why the views of such people in the DUP mattered so much to the priest to the extent where he was considering ending his own life.

“They are so adamant regarding it [homosexuality]. It’s because you have to live even more in fear of coming out… In fear of the church throwing you out, my family disowning me” he answered before declaring he was sure the parents he loved would disown him if they knew of his sexuality.

The radio presenter then asked why parents who naturally love their children unconditionally could be guilty of such neglect solely because their child is gay.

“Well it has happened in other cases where gay men and women have come out to their families and they have been totally disowned. That’s the reality. Whether it is unconditional love or not, there are some things that a parent cannot accept and I think this is one case where this rings true and I would certainly feel disowned by the church in that regard. Because at that Synod last month in Rome, it was focused on family issues and I was hoping the synod would discuss the issue of homosexuality which it was going to do. There were many great expectations from many within the church [that] Pope Francis would take a much softer approach and would show compassion, but the result was absolutely no change.

The church says one thing and then does the other, the church can be very hypocritical on the whole issue of homosexuality. It speaks of accepting gay people, that you shouldn’t discriminate but I think it’s very hypocritical when it comes to accepting if priests are gay. The hypocrisy also is that some heterosexual priests who have had relationships with women, who have even fathered children have in some instances been allowed to remain in position. However if you are gay or in a gay relationship you are dismissed. After all, in terms of the church, Pope Benedict decreed not so long ago that gay people are disordered. How do you think that makes me feel – the same person who decreed that any gay person who wanted to train for the priesthood, celibate or not should be. So it doesn’t mean anything in the end.”

When Mr Nolan asked why the priest remained in the church under such hypocrisy and pressure, the unnamed priest replied:

The presenter continued the interview by asking the priest about how his homosexual feelings had impacted on daily life when humans are naturally driven by sexual desire, physical and emotional companionship and yet he hasn’t allowed himself to experience that type of physical contact.

When asked about coping strategies and dealing with a lack of intimacy the priest said that living that way was “very pressured” and had led him to try other things to help “cope” – “particularly alcohol and perhaps gambling.” The priest also admitted that he knows of other priests, including some of his friends who “just give in to temptation and have relationships.”

Despite never having a sexual experience with a man the priest went on to say that “the more and more I resist having a relationship or engaging in sex, the more and more it is eating and tearing away” at him.

The priest confided in Nolan that “in a nutshell” honouring the rules of his church and religion were more important to him than the desire to express the feelings that were now destroying him inside.

“You come back into an empty house every day, wanting to share the high-points and low-points of the day, you want to have conversation with someone, share intimacy with someone. Which is not there, which I find very difficult and I am sure many priests find difficult.”

“It [being a priest] has been part of me for so long, and I have given my life for so long that I find it difficult to see what else I could do or where I could go.”

“I accepted the rules in the beginning, but my feelings when I was a teenager going into the priesthood training college, my feelings then are not at all like my feelings now. As age has developed I feel alot different about things than I did as a teenager.

At the end of the interview the priest tells how he just wanted to speak out and reach out to others experiencing issues with religion, celibacy and sexuality.

“I also wanted to reach out to those in a similar position because I know there are many gay priests in the church. I am friends with a few who are out and some who are not, some are in relationships, some are not and it is equally difficult for them to bring these issues to the forefront.

Celibacy is not an easy thing to adhere to and some don’t. I think that’s something the church needs to address – the issue of celibacy and also the issue of gay priests in the church. I’d like to see a more compassionate view”