Our democracy in Northern Ireland has never been the project of any one person. Not Adams, not Paisley and not Blair. It has not and will never be the project of any two parties, or communities or even two national identities. The democracy and stability we have in Northern Ireland is the outworking of ordinary people like you and I demanding and working for something better. But our political system has stalled. Since 2007 the NI Executive has rumbled through road bump after road bump and now we face a choice in May: Do we keep the status quo or do we dare for something different?

This is the first Assembly election I can remember in which issues facing the LGBT community are front and centre of many a manifesto. Issues such as equal marriage, the blood ban, IVF, homophobic bullying, transgender issues and the long awaited Sexual Orientation Strategy will all be on the minds of many when we go to the ballot boxes in May.

We have a record number of LGBT candidates from across the political spectrum, from Michael Gray-Sloan of Sinn Fein to Sophie Long of the Progressive Unionists to Ellen Murray and Malachai O’Hara of the Greens. What many in our community may not realise, however, is that voting for pro-equality candidates in this election can and will make a powerful difference in the halls of power.

Unlike the devolved parliaments in Scotland and Wales, the Dail in the Republic or even in Westminster, Northern Ireland has no openly LGBT elected representation in our Assembly. With every single motion brought before Stormont on the issue of marriage equality there has not been one single LGBT voice in that chamber to speak up for us. Can you imagine how much impact we could have if we elected even just one or two LGBT MLAs? Think about it. We would actually have LGBT representation on Assembly committees to talk about health, housing, social welfare and employment. We could potentially have our first openly LGBT Ministers in the NI Executive, taking decisions at a Governmental level that would improve the lives of our community. Wouldn’t that be amazing! 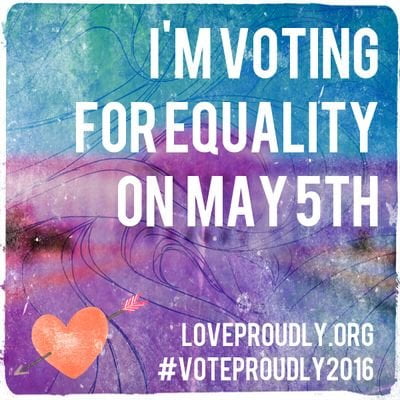 But here’s the catch: None of this will happen if you don’t vote for change on May 5th. It’s all well and good talking about equal marriage and removing the blood ban but if you don’t register to vote by April 18th, contact your local candidates, find out who is pro-equality and then put a 1, 2 or 3 beside their name on May 5th then I’m wasting my breath. And so is every single LGBT activist that has to email, phone, Tweet and meet with MLAs to get things done for our community. We cannot change anything in Stormont if we don’t vote for that change. You might think there is no one party that represents you and that’s OK but find a candidate that will support your basic civil rights and speak to them – ask them where they stand on social issues such as equal marriage.

Northern Ireland is the last place in the UK or Ireland where same sex couples cannot enjoy the basic freedom to marry one another. I think that’s wrong and that’s why myself and a few committed activists established LoveProudly in February of 2015. Our aim is to see an Ireland with marriage equality a reality across the border. During the Westminster elections last year we asked you to vote for pro-LGBT candidates. This year we have launched our #VoteProudly2016 campaign to give you as much information as possible on the candidates that support marriage equality, those that don’t, how to vote and previous voting records. We want to give people the information they need to make their voices heard and to vote for equality on May 5th. You can check that information out at our website www.VoteProudly2016.org.